Some Updates: Tasting Notes and Homebrew

I. New Belgium lands in NC
As of March, New Belgium's (CO) oft-touted beers are available in the great state of North Carolina. Off the bat, three 22-oz bottles are being distributed, and I managed to get my grubby hands on all three fairly early on at the new, neighborly, nice Saluda Wine & Cheese Market up the road. So early, in fact, that *I* was actually the person to open up the cases and take out the first bottles of two of them.
That very same day (March 7) was an unseasonably warm 70+ degrees F, so I decided the first to be sampled, on our porch, would be the Mothership Wit (Mothership is what NB employees affectionately call the brewery), a classic Belgian white/wheat ale.
Appearance: 4/5. Very pale...the color of straw, or cloudy fresh lemonade, or ginger beer. A nice billowy white head floats on top.
Aroma: 4.5/5. Divine, summery goodness. Rich and complex while still light. Notes of cereal, hay, chamomile, coriander, light citrus (grapefruit?), grass.
Taste: 4/5. A delight, if ever so slightly thin at first blush. As it lingers, though, complexity comes out: grain, citrus zest, coriander, chamomile, honey, lots of wheat. A tangy finish.
Palate: 2.5/5. Too damn watery at the beginning, almost salty at the end.
Overall: 4/5. A great beer to welcome the first warm day of March -- and also to welcome NB to my NC palate. This beer stands up to many Belgian wits I've had (Wittekerke, for example) and certainly is better than most American versions in my recent memory. Here's a curiosity: when taken in small sips, it comes across as unpleasantly watery -- but when gulped, it's rich and creamy.
This would be excellent with -lightly herbed/grilled whitefish with pineapple salsa
-salted almonds or cashews
-ceviche
-goat cheese omelet with dill
-lighter Greek/Lebanese fare
Combined score: 3.95/5 (B+)
II. Homebrew follow-up, as promised.
Here's the brew recipe for the saison:
0.5 lb Durst pilsner malt
0.5 lb wheat malt
soak 60 minutes (hey, why not?)
6 lb Northwestern Gold LME
2 lb Gold DME
1 lb corn sugar
1 oz Hallertau hops (start of boil)
1 oz US Golding hops (last 20 minutes)
1 oz Styrian Golding hops (end of boil)
boil 60 minutes
Yeast: 4th generation cultivated Bastogne Yeast (originally from the Stammerer Ale)
Per Alex's suggestion, I'm trying a warmer, longer primary fermentation on this one, which I'm calling
Josquin des Prez 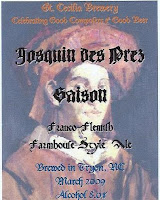 Josquin, who himself hailed from the rural borderland between France and Flemish Belgium (the political map, of course, very different in the late 15th century), the very home of the Saison style. And, really, as Josquin is one of the truly great composers in the history of Western Europe, it seemed fitting to pair his name with one of the truly great beer styles. And given the fact that this brew is on its way to being a whopper -- I was aiming or 7% ABV, but we're pushing 9 last I checked -- one of the Giants (Josquin) seems to be called for.

And, following bloggy tradition, I feel the need to finish off with a few musical homages to the great man. He was as instrumental as any one person in completing the stylistic transition from the late Medieval aesthetic into that now known as the Renaissance. Here are some of his best:

Posted by Mark aka "Perm" No comments: Links to this post

So on March 1 we made the move to our new place, just up the road from our previous residence - and, given the fact that it's still a rental, we love it!  Slightly smaller (more appropriate size) and in MUCH better condition. Lots of character.
And still lots of space for brewing and cellaring.  Photos will come soon...we only found the camera battery charger yesterday.
And speaking of finds, the landlord had 3 boxes of swing-top Grolsch bottles in the basement: "you can have 'em, just give me some of the beer, man!" I believe were his exact words.
I unleashed the "Appalachian Pale Ale" yesterday and it is de-licious.  Probably my favorite homebrew creation thus far.  This one will be worth posting tasting notes, for sure.  This more than makes up for the failed attempt at this same basic recipe a couple of months back, and the re-used Bastogne yeast (harvested from the joint project with JT) makes it go down REALLY smooth.   This is something of a celebrity brew for another reason, as well -- it moved to the new apartment with us, mid-ferment!  I'll admit to being quite apprehensive about hauling the carboy up the road, but it seemed to work out just fine.  I left it in secondary for an extra week, just to give it more settling time.
And I've got a Saison bubbling away in the closet (started it last Friday).  This is my first foray into the farmhouse genre, so we'll see what happens. Also using some harvested Bastogne yeast for this go-round. Thanks to the aforementioned closet and a little space heater, I've attempted the warm-ferment that is often recommended for a Saison. At this point, it looks nice and cloudy.
Name, brew recipe, and label to be unveiled soon...but with a centuries-old origin in the rural borderlands between Flanders and France, I've got a great idea for the nomenclature on this one.
In other music-meets-beer news, I stumbled across this: 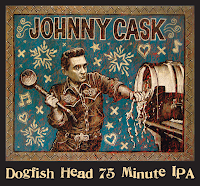 This looks pretty exciting to me.  If I were in NYC on the 26th, dog(fish)gone it if I wouldn't make it out for that!
Posted by Mark aka "Perm" No comments: Links to this post