Brews that won't break the bank, and a fine, fine stout

A. Brews that won't break the bank

While it is true that a top-drawer beer is far less costly than a top-drawer wine (750 mL of fine Trappist or American Craft rarely exceeds $10; you can spend upwards of $20-$40, if not more, for an equivalent wine), a steady stream of gourmet Belgians or Germans can still easily deplete the wallet. So how about some budget-sensitive offerings?
Distribution and location has much to do with the availability and price of beer from one locale to the next. Given that caveat, however, let me present my first two selections in the "beers that won't break the bank" category.

I. Harpoon Brewery (Boston, MA)
These guys are no stranger to Perm's Picks. We've recently discovered a 12-pack sampler that includes the original Harpoon Ale, UFO Hefeweizen, IPA, and Munich Dark (3 of each) for under $13. All four brews are solid. Harpoon Ale is perhaps slightly watery for my taste, but it is a no-complaints American Amber Ale that fits the bill perfectly on a warm summer evening. The Munich Dark makes an excellent marinade for a crock-pot beef stew (see below), and the UFO has a nothing-short-of-pleasant orangy twist to it. Quenching. 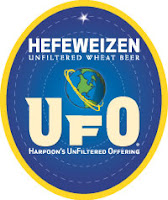 II. Highland Brewery (Asheville, NC)
I don't have enough good things to say about this brewery. They also fit the bill for us in NC (especially Western NC) -- as a big supporter of the Local Food movement, I can include the Highland Brewery as a liquid-goods qualifier for our household. I don't know how far and wide they distribute, but get your hands on any of theirs and they won't disappoint. The Gaelic Ale is Sara's and my favorite "house brew;" the Kashmir IPA, St. Teresa's Pale Ale, Oatmeal Porter....as well as their more exotic offerings -- they're ALL super solid. Highland also offers a mix-pack 12-box; their 6-packs usually run for us in the under-$8 range.

B. The fine, fine stout.

Looking back at the monster list on my second post, you'll find Weyerbacher's Old Heathen Stout (the one that goes so well with Dublin Mudslide ice cream). Weyerbacher has an oak-barrel-aged (bourbon barrels, no less) version of Old Heathen that is called, "Heresy." I tried it last night. I loved it. It is a bigger, bolder, sweeter version of the Old Heathen -- yet it did not beat me over the head and bowl me over the way I was expecting it to. It's a smooth-drinking dark brew with a caramel-colored head. Probably my new favorite sweet "Imperial" (high gravity) stout. 8% ABV. I had it along with a crock-pot beef stew (free-range Dexter roast cooked all night and half the day with Harpoon Munich Dark, carrots, and onions) and thought I had entered heaven. Save some of the bottle, though; it matches dessert just as easily (dark chocolate, chocolate with raspberries, or even pound cake with fudge would all have a pleasant conversation with this one). It would age for about 3 years pretty well, also. 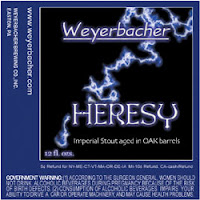