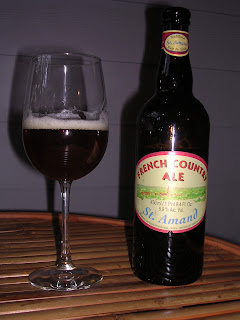 It's been long enough since there was an actual "pick" on "Perm's Brew Picks" that I decided it was high time to include another one.
And just in time, I've discovered a wonderful one, preventing me from putting some mildly interesting beer up here just for the sake of picking something.

I have encountered biere de garde before, a little over a year ago -- for a family Thanksgiving gathering I followed G. Oliver's advice and took a bottle of Castelain/Ch'ti along for the feast. It paired quite well with the banquet (indeed better than the red or even the white wine that was present) but I was a little underwhelmed with the brew as it stood alone -- I vaguely remember it being a little too much on the lagery side of the equation for me, although looking back now I expect that I was counting on a Belgian Saison or even a Strong Golden Ale, and although they are related, they are not the same things.

And now here I'm presented with St. Amand, offered by the same brewery as Castelain/Ch'ti (Brasserie Castelain), but it's a whole different ballgame.

St. Amand pours a handsome -- no, gorgeous -- copper color with plenty of generous head, even when poured slowly. The nose is extremely complex -- clay soil, caramel, butter, farmland, and fresh aromatic hops are all in there, along with some more elusive intangibles that are conjuring up all sorts of images of rural Europe for me. On the tongue, the caramel sings out with a spritzy edge, the hops keep it interesting, and the butter moves to the forefront, but what really does it for me is a slight sour twist towards the end -- reminiscent of those Flemish Ales that I've recently fallen in love with (such as Duchesse de Bourgogne). This says to me, "drink with food!"
I plan on trying it out with the mild dhal and curried shrimp we're about to have in a few minutes. I have moderately high hopes.

And I must say, after a very disappointing concert of bad French chamber music last night, it's quite nice to find something to so readily restore my appreciation for things Gallic. (I do, after all, claim descent from Huguenots...) Vive la biere francaise!

And I think it will also make an appearance next to the turkey, dressing, cranberry sauce, and everything else in about 7 weeks....
Posted by Mark aka "Perm"