Sumttynose and the Hershey company 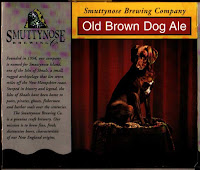 Color: reddish-brown (emphasis on the brown), permitting a bit of light.

Aroma (isn't this another word for "odor"?): Not so hoppy. Some chocolate comes through in the nose here, a foretaste of the (likely) very near future.

The Old Brown Dog offers no taste at first, or rather offers a fairly ordinary "dark beer" taste, then the flavors of leather and (particularly) chocolate rush over the taste buds and into the nose. The finish is long and chocolately, like trying to escape Colombia by way of a cacao plantation. This is not how I like my beer. A little less chocolate, or even the same amount of chocolate, up front would be okay, but because it forms the entirety of the long finish, each sip is spoilt.

I will consider the following exception before I condemn the Smuttynose people: each beer is a reflection of the place in which it is made. I grant the exception because Portsmouth is a town on the brief New Hampshire coast, and we all know how salt air affects everything: the texture of bedsheets, the color of weathered shingles, the temper of one's skin. So perhaps drinking the Old Brown Dog in its home on the cold seashore is an entirely different experience. Without being there, who can say how the air might affect the taste? Maybe, at home, the beer smells like daisies.
Posted by AAK