I hope everybody is voting or has already voted. This month's All About Beer magazine had an interesting article about past US Presidents and beer, from Washington and Jefferson the homebrewers to Martin Van Buren the party animal to Rutherford B. Hayes the tee-totaller and his First Lady "Lemonade Lucy," to FDR who overturned Prohibition, and Jimmy Carter -- who signed into law the provision that makes homebrewing possible today.
Last month's William Billings Colonial Pumpkin Ale is in the bottle and conditioning.  Preliminary pre-carbonation taste tests hint that it's going to be nice.
Here's the run-down, since I didn't include it in the last post:
1 lb Briess Caramel 20L specialty grains
6.3 lb NB Amber Malt Syrup
6 lb 9 oz fresh local pumpkin, oven-roasted and mashed into pulp
3 oz Cascade hops
7 oz wildflower honey and Grade B Vermont maple syrup
1/4 oz grated fresh ginger
1 cinnamon stick
4 whole cloves
1/2 ts allspice (ground)
1/2 ts nutmeg (ground)
White Labs Belgian Ale Yeast
I soaked the grains and the pumpkin (in a mesh strain bag) in 1 gallon water @ 150F for 40 minutes, then rinsed both bags with another 1/2 gallon water.
Water brought to the boil: malt extract, honey/maple syrup, 1 oz hops, and 3 lb pumpkin (in bag) added to boil.  Boil for 60 minutes, adding 1 ts Irish Moss and 1/2 oz hops at 45 minutes.  Add final 1/2 oz hops and all spices at 60 minutes.
Topped up to 6 gallons (hence why a lower gravity) cold water and pitched yeast at 70F.
Original Gravity: 1043 (if I'd left it at 5 gallons, would have been closer to my target of 1065, but I also had significantly less honey/maple syrup to use than the source recipe called for, which also brought the gravity down).
Left in primary for 8 days, then racked to secondary, throwing in 4 oz brown sugar and 3.5 lb pumpkin pulp in a mesh bag.  In secondary for 13 days.
Final Gravity: 1007
Alcohol by Volume: 5.0%
Primed with cane sugar and bottled.  I'm going to leave it alone until Nov.24, for the first taste-test on Thanksgiving Eve.
I intentionally went light on the spice profile, following the recommendations of a few fellow brewers on beeradvocate.com, and also in order to let the natural flavors of the pumpkin have a chance to come through. I didn't want to make a pumpkin pie ale, which is what many end up being -- too much spice, and that's all you end up tasting.
And, the November homebrew is in the pot!  I took a detour from my original plan (Belgian Dubbel) and got inspired by a Pisgah Pale Ale clone kit from Hops & Vines of Asheville. Pisgah is an excellent brewery, and their Pale Ale is one of the best APAs I've had, local or otherwise.  And since Mrs. Perm always advocates for me to brew hoppy pale ales, it seemed like the thing to do.  The pumpkin ale has a longer waiting period than my standard brews, and a Dubbel would have had an even longer hibernation period.
For nomenclature, I wanted to pay tribute to the source inspiration for this recipe (Pisgah Brewing in Black Mountain, NC).  I've decided to call it
Black Mountain Appalachian Pale Ale
Here's the photo for the label: 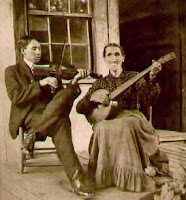 The tag line will read: "Our homage to one of the finest breweries (and one of the finest brews) of the Blue Ridge -- and the music that has echoed in these hills for centuries."
I'm quite fond of the play on the acronym at work here: APA, of course, being "American Pale Ale," but "Appalachian" works nicely in its tip-o-the-hat to Pisgah.
In the interest of having the composer theme unbroken, I considered styling it "Aaron Copland's Appalachian Spring Ale," but that's all about Pennsylvania and is based on a poem about the Adirondacks.  Not the same.
I do confess a deep fondness for Appalachian folk music (Old Time, ballads, etc.) and it seems entirely appropriate to send one of my St. Cecilia tributes in that direction.  Plus, it gives me an excuse for more YouTube gems here:
Dirk Powell and Riley Baugus are two of the shining stars of the Old Time revival. And "Cumberland Gap" is one of my favorite Old Time numbers.
Profile and brew overview to come.
Posted by Mark aka "Perm"

You'll be pleased to know that I'm starting in on clawhammer banjo. The other two Shakes members play old time music, so it was only a matter of time... I'm starting out on a Buckbee fretless from the 1890s-- the strings are really close together, it's torture! But if I can make passable noise on that thing, I figure I'll be unstoppable once I know where the notes are!