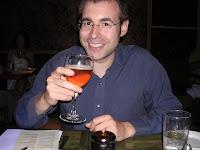 La Caterina Trattoria has been recommended to Sara and me for quite some time now, so we were intrigued by the prospect of a beer-tasting dinner chez lui. Belgian beer, no less.

The menu was slightly altered from the pre-dinner one we had seen online, but still looked great. Although, I must say: beforehand, when we made the reservations, we set it up so that I would get the vegetarian menu and Sara the standard, so that we could maximize our culinary experience. Had we seen the overall menu at the time, we wouldn't have bothered: of the 6 courses, only two were actually different -- the other 4 were simply the same thing, sans meat.

The food was good, for sure. Some courses were better than others (the artichoke foccacia with asiago cheese was scrumptious, as was the "skate dusted in chick pea flour and pan sauteed" with grilled peach halves in balsamic syrup), and the only food item that was a letdown was Sara's seared Kobe beef, which was basically raw. Overall, though, the dinner experience was not all that we had hoped it would be. For the price, it could have been more. I say this for two reasons:

1. Our previous beer-dinner experience, the Dogfish Head-sponsored dinner at The Raleigh Times, was at a chic restaurant in downtown Raleigh, North Carolina's home of overpriced dining options -- and was cheaper than the one at La Caterina.

2. We couldn't help but notice that we were continually gypped by the servers. At first it seemed to be coincidence, but it kept happening. The serving method was very unorganized: multiple servers, who made their way around to the tables in no particular order or with no particular server going to the same table every time. Nevertheless, we (seated pretty much in the middle of the [small] room) seemed to be among the last served (food or beer) just about every course, and seemed to also be getting smaller portions in our glasses. We even went so far as to tactfully point this out to one of our servers, which didn't do very much good until the final course, ironically our least favorite. So that definitely colored our experience of the evening.

All that being said, it wasn't bad. At all. We got to sample some amazing Belgian brews. However, as an overall experience, we determined that Beer Dinners are most successful when organized by a single brewery (instead of a chef -- two chefs, to be specific), pairing a range of brews from that same brewery with carefully picked dishes (rather than a hodgepodge of different beers paired with a hodgepodge of gourmet dishes). And, don't set your expectations overly high -- we were hoping for a repeat of our Raleigh Times experience, which probably wasn't fair.

Here's the rundown of the menu courses, with commentary.

I. Artichoke Foccacia with strips of Asiago Cheese.
Scaldis Prestige

Scaldis Prestige (Brouwerij Dubuisson, known in Belgium as Bush) is definitely a high-end beer -- as in, a 750 mL bottle running in the neighborhood of $50. I don't make a habit of paying this much for wine, let alone beer. Why is it so expensive? Well, it is bier brut -- essentially, Champagne beer (move over, Miller High Life!). It is treated to the same process that wine goes through to become Brut bubbly. The resulting brew is very complex. Definitely a "sipping" beer (13% abv, with the fizziness to boot), with sweet notes. It is fermented and aged in oak casks, followed by further fermenting in the bottle to give it the brut edge. It pours a nice fizzy head that dies away fairly soon. The nose bursts with grass, hay, coriander, brown sugar, the ocean, and wet moss (gotta love those Belgian yeast strains). It is sweet yet smooth, with a finish like cognac or brandy. Definitely an aperitif beer. Ironically, it was one of the best pairings of the night (the appetizer, no less) -- the sweetness of the beer and saltiness of the bread and cheese went quite well together. And that was some damn fine asiago. Artichoke foccacia? I've definitely gotta try making that some time.
And I can now say that I've had a $50 beer. 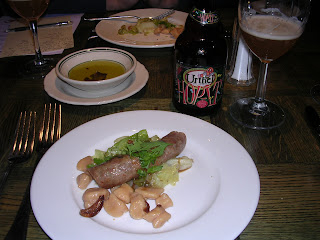 This was one of my favorite courses. Sara was quite generous in giving me half of her duck sausage, since my vegetarian version was simply the gnocchi and cabbage (don't get me wrong, it was excellent gnocchi, but I have a soft spot in my culinary heart for duck -- why is it that the cutest animals are always the most delicious ones? That's a discussion topic for another day).
Based on my comments at the time, this was assuredly one of my favorite brews of the night as well. "Yummy!" is how I described it. And, after a few more sips, "It would be easy to drink a lot of this and go crazy." Urthel Hop-It has that oddly addictive quality that many of the finer Belgian ales possess, in my book. It is a "new style" of Belgian beer, namely, very hoppy -- 80 IBUs, to be precise, brewed with all-European Noble hops. It is, nevertheless, very drinkable. The nose presented fresh grass, hops, honey, and leather. The bitterness waits until the end of the tasting. It was quite good with the duck and the sweet potatoes -- the hops carried it right through. At 9.5%, it's still quite strong, but after that Scaldis it was much more quaffable. 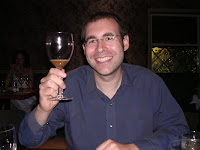 Here was one of the courses in which the main and vegetarian options were truly different from each other. Both were quite delicious, although I have to say that I think I won out in terms of an exciting dish. The Saison paired equally well with both (mussels and ale being a classic of Belgian fare). Saison DuPont is, of course, a perennial favorite of mine, and it represents a classic style of Belgian "farmhouse" ale. It features an old-generation family yeast, so it is truly a stalwart old-school traditional Belgian brew. At 6.5% ABV, it's quite easy-drinking (for a Belgian), but it nevertheless maintains a certain element of je ne sais quois on the palate, with a complex finish. It was excellent paired with the olive-oil-drizzled squash, and heaven with the mussels. Here is a case where we were both resolutely steamed by not getting nearly enough in our glasses.

As already mentioned, the beef was nearly raw, so I was more than happy to have had the same dish, sans boeuf. The mushrooms, cipollini (cute little baby onions, nearly caramelized), and even the wild rice (usually not a huge fan) were all delicious. St. Feuillien Brune represents the Dubbel, or "double," style of Abbey ale. It is, basically, a malty-carnival ride. The nose has nice tones of honey, caramel, and black tea (a la Assam), and it maintains a good bubbly presence throughout the glass. The nuttiness of the wild rice and parsley struck up a fluent conversation with the malty nuttiness in the ale. It was a good pair with the mushrooms, but an even better pair with the glazed onions. At 7% ABV, it's nothing to quaff liberally, but it is a great dinner beer for darker platters such as the course it was served with. 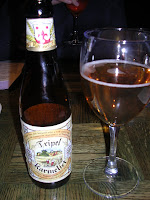 Food-wise, this was probably the best course overall: both the fish (I had never eaten skate before, but I immediately fell in love with it) and the vegetarian option (the mezzaluna stuffed with cheese) were wonderfully prepared. Those balsamic peaches really tied it all together.
Tripel Karmeliet is a fantastic example of the Tripel style of Abbey Ale. It's lighter in color than a Dubbel, but definitely stronger and richer (8% ABV). Tripel Karmeliet is brewed by a family-owned operation, the Bosteels Brouwerij, and this particular offering follows a 17th-century recipe making use of oats, barley and wheat. It pours a beautiful golden color that's fun to look at, and it is quite bubbly besides. The nose is incredibly rich: apricot, wheat, snow peas, coriander, Chinese 5-spice powder, and a wee bit of banana. The taste brings on a touch of toasted sesame, and the spicy bubbliness keeps on coming. Not an every-day beer (so saith Sara), definitely a special-occasion, rich, rich beer. Thick, even. It would go well with Vietnamese cuisine (think light, but spicy, noodle-bowls with peanut sauce), but it loved it some balsamic peaches, and also was very happy with the romano, ricotta, and the fish. I think this has become my favorite Tripel. An amazing beer. 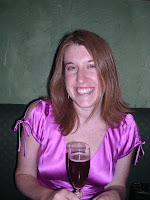 At long last, we got larger portions in our glasses. Unfortunately, it was our least-favorite of the night.
The evening ended with a cherry lambic from Boon, one of the old-guard lambic brewers. This particular lambic recipe calls for 75% aged beer, 25% new, with real whole cherries thrown in the vat (none of this syrupy juice stuff for these guys). Lambic is one of those things that not everyone enjoys, but Boon is definitely the real deal, a purist if you will. I found it to be much better than the Lindemans offerings that tend to be the most prevalent in shops around here. The nose was tart, acidic, winey, sour, and wild-yeasty (makes total sense, since lambics are brewed exclusively with wild yeasts); Sara's comment on the nose was, "Medicinal, like the dentist's office, yet not totally unpleasant." However, it doesn't especially taste acidic even though the nose would have you think it would. It tastes, basically, like you're sucking on cherry pits. Believe it or not, though, it paired quite well with the pistachios and the hazelnuts.

A thought about beer dinners:
The world of the beer connoisseur, and more specifically, the beer-and-food-pairing connoisseur, is certainly a niche that in our culture finds itself between a rock and a hard place, resulting in something akin to a "Catch-22" situation. Fine dining has been the near-exclusive domain of wine for so long that the beer people inevitably face an uphill battle from the get-go. Along with that, the word "beer" for most Americans, at least since the 1920s and 1930s, conjures up images of (1) Budweiser, Coors, and associated pale, flat beverages, probably in cans; (2) the consumption of large quantities of said cans, for their own sake, not as part of a meal; and (3) said cans being consumed by a particular demographic of folk, or at least being consumed under certain situations, fine dining not being among them. So, uphill.
Now, the problem is, beer drinkers are different from wine drinkers (setting aside for a moment the fact that plenty of us love both -- I'm certainly a sucker for a good Rioja). I couldn't help but feel that folks at the dinner at La Caterina (and, to a lesser extent, the Raleigh Times in April) were being just a little too posh, just a little too stuffy, just a little too affected -- I mean, the whole point of drinking beer, and trying new beers (and, for the record, eating food) is to have fun and enjoy it and have a good time. I love eating immaculately-prepared, gourmet food, and pairing it well with excellent beers and wines. But I hate being stuffy and prissy and hoity-toity about it. Life is too short. So, I kinda wanted to look around and say to these people, "This is beer! Sure, it's gourmet, high-end, specialty beer, and yes, this is a fancy restaurant. But still!"
So, Catch-22. Beer needs more respect than it normally gets in this country. Beer does not need to be gourmet-ed beyond our reach and shelved into the domain of the ultra-elite. That doesn't do anyone any good.
Well, I'll get off my soapbox now. Here's to the World Beer Festival in Durham, NC, October 6.

A couple of more fun photos from the night.... 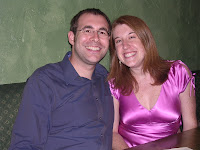 After 6 rounds of ales and food, we were happy to smile for a picture. 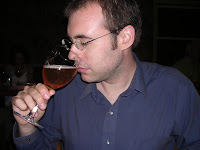 Me doing my best Garrett Oliver pose. I think that was the Tripel Karmeliet, but who can really say for sure?
Posted by Mark aka "Perm"