A wee bit of housecleaning

Before heading off to Ireland for a week, I thought I'd throw some disparate and random thoughts up here. I've got a pile of snippets that has been increasing in volume, so why not throw them on the blog before heading abroad?

Now, it's no secret that Ireland, when it comes to beer, is no Belgium. For that matter, it's no England or Scotland, either. The standard perception is that you've basically got Guinness, Murphy's, Beamish, and yucky "lager" like Budweiser. Don't get me wrong -- Guinness, Murphy's, and Beamish are all three quality brews in their own right. And I must say, whilst traveling in Scotland a few years ago I became quite fond of Caffrey's, a caramel-colored "bitter" from Ulster.

I am quite happy to have discovered the existence of the Porterhouse Brewpub in Dublin. Sara and I will be sure to visit one of their establishments and report back.


On to the Hodgepodge of entries....

1. A Mini-tasting at Bruisin' Ales

Way back in June, Sara and I made it up to Bruisin' Ales in Asheville for one of their periodic mini-tastings. This particular one featured 5 Belgians that I was more than happy to sample.

1. DeKoninck
This one is fairly easy to find in the Southeast, and I gave it a simple "SOLID" rating, noting that it's good with cheese. Not a very in-depth review, but needless to say, it's yummy and worth having on hand.

2. Blanche de Bruxelles
A good, light wit -- very summery. Not too much coriander in it, so it has a nice balance. It's extremely pale but it has a rich taste and doesn't fall victim to being watery the way it would if it were brewed on this side of the Atlantic.

3. Liefmans Kriek and Framboos/Frambozen.
Both were excellent fruited lambics, made with real fruit. Quite honestly, looking back now, I prefered both of these to the Boon that we had at La Caterina.

4. Malheur 10 Tripel
This was an excellent gourmet Tripel -- very bubbly and yeasty, paving the way for the find of the day:

5. Malheur Dark Brut
The whole tasting was worth it just to have this one. It was excellent, and paired perfectly with both cherries and cheese. It is a "sparkling dark ale" chiming in at 12% ABV. Here is their own description: "The bouquet is extremely complex! Sherry, vanilla, wood...with a coffee flavour as a result of the roasted malt. Its taste is oak dry, so this is a genuine brut. Its bitterness is nicely balanced with the tannin of the wood and just a sweet zest from the alcohol. It has an unusual cork dry aftertaste. This ale is bottled according to the so-called 'original method.' The yeast is removed from the bottle by turning and disgorging." -- A brut beer! It was incredible, but at over $25 a bottle it won't be frequenting our house, which is too bad.

My sister-in-law Erin traveled with a group from the College of Charleston this summer to Italy, Austria, and Germany. She brought me back a fantastic souvenir -- a stein glass from the Brauhaus in Munich! 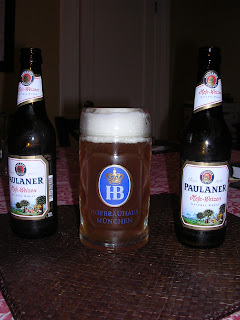 I inaugurated it with a couple of bottles of Paulaner Hefe-Weizen, a Munich original.
Thanks, Erin!!