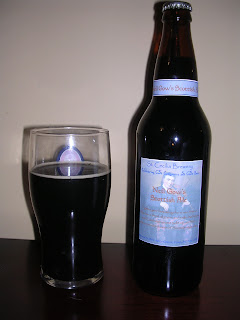 I do believe that this third round of homebrew is by far my favorite. I am quite, quite pleased at the way this one has turned out -- which is a nice surprise, since I was most worried about this one whilst in-production:

* Upon resuming the bottling, I capped 3 bottles without topping them off, so I had to uncap them and do the top-offs, wasting 3 caps.

The moral of this story is, don't ever be in a rush whilst brewing OR bottling. I was worried that all the pouring back into the bucket would introduce too much oxygen to the mix, but it has turned out just fine.

It is a dark, dark brew, almost porter in color. It's a very dark coffee-ish brown, with a thin off-white head.

The aroma (granted, I've done the notes-tasting just after getting over a cold, so my sinuses are not quite as open and active as they probably should be...) presents toasted nuts, dark caramel, a wee bit of hay, and faint alcohol notes.

On the tongue, you're greeted with allspice, smoke, roasted grain, the slightest bit of cinnamon, caramel, a very slight ester note, and the faintest hint of those Kent Golding hops.

The palate is very pleasant: it's both spritzy and silky, and goes down warmly.

Sara and I poured half a bottle into a batch of venison-sweet potato-black bean chili we made, and it was stellar -- both in the bowl and the glass. 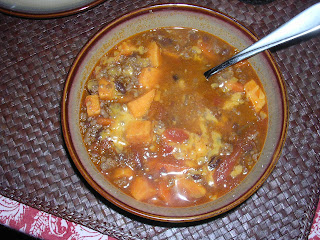 Venison is a most Scottish of dishes (even if chili is not) and the pairing is wonderful. 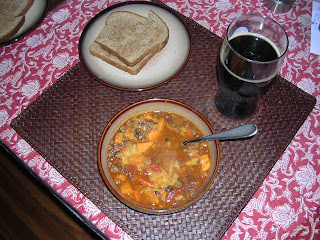 This ale is complex enough to pair well with any number of dishes, though. I'm excited to explore other avenues. The smokiness in particular should serve it well in conjunction with any number of hearty wintertime dishes. And, importantly, it's terrific all by itself.
Posted by Mark aka "Perm"

believe it or not, the Courage glass is legit -- procured from the short-lived Sam's Quick Stop beer club membership.