November's here, and so is the Belgian homebrew 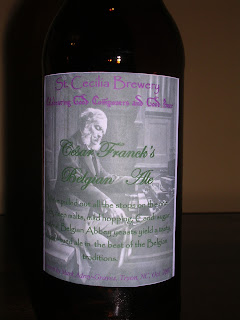 Even though it was probably a tad on the early side, I decided to break out the Belgian homebrew and see how it did.
Again, Sara was all ga-ga over the results. I think it's still a little young, and as it sits in the bottle will continue to mature nicely. That being said, I'm quite proud.
It's got a beautiful rust-copper reddish-brown color, reminiscent of cherry furniture (how's that for a creative comparison?). The nose (such as it is; I'm currently battling a cold, so my olfactories aren't all they should be..) brings to mind caramel, wildflower honey, roasted nuts, and the slightest hint of cinnamon. On the palate I get a spritzy warmth, delicate hopping, toffee, and brown sugar. It's a bit like a very mild Chimay (if I do say so myself) -- I expect it would go nicely with duck dishes or other game, and certain desserts (creme brulee, anyone?) as well as roasted nuts -- ooh, or pumpkin or pecan pie!
And at the end of the day, I'm ecstatic that all of my homebrews are not going to end up tasting the same. This couldn't be more different than the Green Zinger.
I attempted to use my new hydrometer to test the alcohol content of this one; I'm not sure I've mastered the device for total accuracy yet, but it appears (at the time of bottling) to be in the neighborhood of 5% ABV. I'll keep working on this device. 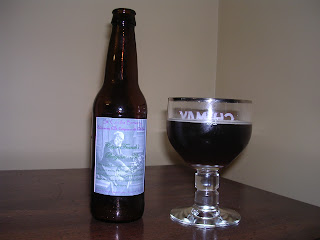 Being the nerd that I am, I've devised a naming scheme for my home brewing operation and all my various creations (the third round is already on the starting line). Given my love for music, especially classical music (hey, it's what I do), I've opted to call my moonlight operation the "St. Cecilia Brewery" in honor of the Patron Saint of music and composers, and name all the various brews after the great (and sometimes quite obscure) composers whom I love. I'll try to pair up styles with names based on nationality, alliteration, or just good old fashioned puns. Thus, my first batch has been christened "Maurice Greene Zinger" (I couldn't resist), and this recently opened creation is now "Cesar Franck's Belgian Ale."
I know I'm a dork; but hey, it's fun.

In other news, the world hop shortage is making its rounds and is being felt in all corners. When I picked up my Scots Ale kit from Asheville Brewers Supply last week, I had to get my Kent Goldings in leaf instead of pellet as I originally was going to; they were simply all out of the pellets. Whenever we get to the point where we're living in a house with land to do things with, I think it would be fun to try growing some hops. If I can get any rootstock at that point, that is.
Posted by Mark aka "Perm"