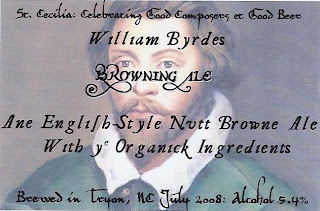 William Byrd's Browning Ale
is my latest creation. It is also the most original brew (in terms of recipe origin) I've attempted thus far. The inspiration for the recipe came from the Beer Captured (have I mentioned recently how much I love this book??) clone version of Samuel Smith's Nut-Brown Ale, but I decided to take some detours from the ingredient list of the recipe-as-published, most notably in the use of organic malts and priming sugar. 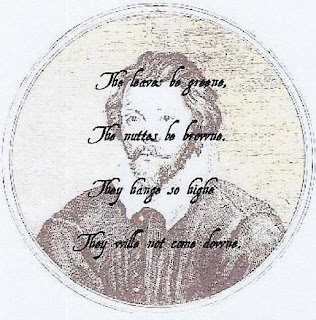 It sat in the primary for 7 days, then got racked into secondary for another 7 days (was going to be 5 days, but I got lazy). Went into the bottles on the 28th, and I'm planning on breaking the tester out on August 16.

Browning refers to a (once) popular song from Elizabethan days ("The leaves be green/ The nuts be brown/ They hang so high/ They will not come down") used in a famous variation set for Viols by the great William Byrd. In the words of my former teacher, Dr. Silbiger, "The lyrics are probably naughty." As the comments from a few postings back show, another contender for the title of this one was Purcell's Nut Brown Lass. She'll have to wait for a later worthy brew.

I was unsuccessful in finding a video with a performance of Browning (at least one that's in-tune or well-played), but here's a delightful work of Byrd's, (another one with roots in a salaciously-worded song, The Carman's Whistle).

II. In the Hopper

I've just racked my next brew into the secondary. This one, an English Mild Ale kit from Northern Brewer, is destined to become Herbert Howells English Ale. The English Mild is actually a form of Brown Ale, once nearly ubiquitous in brewery-pubs across England but now mostly limited to the Midlands. Mild Ale is a session beer, usually with between 2.8 and 4.5% alcohol by volume. Mild is most commonly found as a cask ale, pointing to its origin as a local-brewed pub standard. This will not be one that I attempt to age for any significant amount of time. 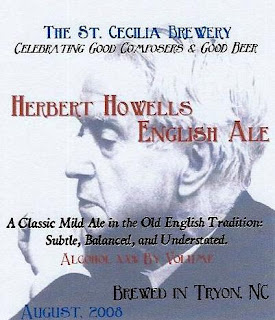 Northern Brewer's stock is rising pretty high in my book. They are very well-priced (even factoring shipping charges in!!), have a broad array of ingredients, kits, and supplies in their catalogue (both online and in print), and are constantly adding new kits and styles to their quiver. I expect I'll continue to do business with them. I don't want to neglect my local brew supply shops (Asheville Brewers and Hops & Vines), but until such a time as we live significantly closer to those shops (or travel to & fro much more regularly) it's hard to countenance paying (often) more for the same ingredients, on top of paying for gasoline to get there, when I can have UPS (who's already on the road anyway) drive it to me at competitive cost. This isn't quite following the party line on the buying-local scheme, but I justify it in a few ways:

1) This is homebrewing. I'm already making a political statement and doing my part to be off-the-grid.

2) The Local Brew Supply shops don't get their ingredients and supplies from their backyard garden (or factory). Odds are, they might order from NB as well.

"With ye Organick Ingredients".... everything about this is perfect.

Oh, and by the way, the beer is quite good.