Our Founding Fathers, the Separatists 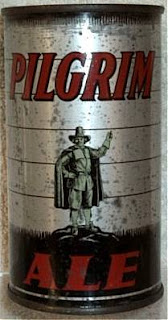 And now, an important note on our American history, from thestraightdope.com:

Is it true the Mayflower landed at Plymouth, Massachusetts in 1620 because the ship ran out of beer? I have been told that barrels of beer were the most voluminous and important item in the hold because water couldn't stay drinkable on a ship for that long.

You heard right, more or less: The Mayflower colonists decided to settle at Plymouth because they were running low on beer. In an age when so many have lost their moral compass, it's comforting to know that people in the old days had their priorities straight.

Pretty much everything you think you know about the Pilgrims is wrong (including their being called Pilgrims--that term didn't catch on until centuries later), so it's not surprising the beer angle slipped under the radar. Here's the story, assembled with the help of my doughty research assistant Bibliophage:

On November 9, 1620 [November 19 by modern reckoning], after 64 days at sea, the Mayflower sighted Cape Cod. You may inquire: What sort of idiot would sail across the north Atlantic at the height of storm season? The voyagers probably asked themselves the same question. They'd initially left Southampton, England, in August, but one of their two ships, the Speedwell, sprang a leak. Repair attempts failed, and by the time the travelers had consolidated themselves on the Mayflower, a month had passed. Then they spent an extra couple weeks under sail due to bad weather, arriving just in time for winter. That was problem one.

Problem two was that Cape Cod was not where the colonists were supposed to be. Their patent from the Virginia Company of London authorized them to establish a plantation between 38 and 41 degrees north latitude; the tip of Cape Cod was just north of 42 degrees. The group dutifully attempted to sail south, but shoals and contrary winds kiboshed that idea. Some now spoke of splitting up. Contrary to what we imagine, the colonists weren't united by religion. Of the 102 passengers, around 40 were Separatists (i.e., separated from the Church of England), a like number were regular folks recruited by the London merchants who underwrote the expedition, and the balance were hired men, servants, and so on. Finding themselves at odds in a legal no-man's-land, the colonists drafted the Mayflower Compact. The 41 who signed it on November 11 included no women but were otherwise pretty cool, consisting of Seps and non-Seps, masters and servants, all bound by the realization that has animated every republic since: If we don't stick together we're wolf chow.

The question remained exactly where the colonists should set up shop. Looking at the map now, you'd think a little bird would have twittered: Boston! You can found Boston! Apparently not. The choice came down to someplace called Anguum (probably near the present town of Ipswich), or else what the ship's navigator called "Thievish Harbor," in the direction of what's now known as Plymouth Bay. The latter being closer, the colonists headed there and found the location promising, in part because the land had been cleared earlier by Native American farmers who then conveniently died due to European-borne pestilence. The voyagers weren't disposed to be fussy: "We could not now take time for further search or consideration, our victuals being much spent, especially our beer, and it being now the 19th of December" (Mourt's Relation, 1622, commonly attributed to colonists William Bradford and Edward Winslow). Plymouth it was.

Beer was a dietary mainstay in those days. Chances are the beverage in question was "ship's beer," a not-very-alcoholic concoction that, along with the even weaker "small beer," was drunk in formidable quantities during the colonial era (upwards of a quart per day seems to have been a typical ration). Undoubtedly an advantage was that, unlike more perishable foodstuffs, ship's beer would keep during long voyages and, having been boiled, was likely purer than ordinary water.

The colonists used up their beer by Christmas. At first the ship's captain gave them a little out of the crew's supply, but when sickness, possibly scurvy, began felling the travelers (about half died that first winter), things got ugly. "As this calamity fell among the passengers that were to be left here to plant, and were hasted ashore and made to drink water that the seamen might have the more beer, and one in his sickness desiring but a small can of beer, it was answered that if he were their own father he should have none" (Bradford, History of Plymouth Plantation, circa 1650). The captain relented when his own men began getting sick too, evidently not wanting it to be known to history that, in addition to being late, lost, etc, he was the SOB who hogged the beer.