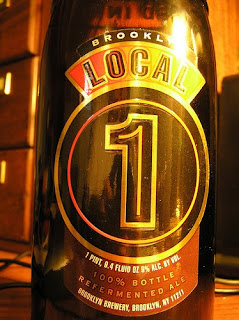 What is Brooklyn Local 1?

Let us begin with the caption on the bottle:

In Williamsburg, Brooklyn, we forge barley malt and hops from Germany, aromatic raw sugar from Mauritius, and yeast from Belgium into Brooklyn Local 1. Behind the golden color, find a dynamic complex of flavors, Belgian flair, Brooklyn fortitude, and a dusting of yeast after 100% bottle re-fermentation. Enjoy it locally or globally, as an aperitif or with your favorite dishes.

Now, a quotation from The New York Times:

Steve Hindy, the president and cofounder of the brewery, said he and the brewmaster, Garrett Oliver, “had always been fascinated by Belgian-style beers and knew we could produce them here” — here being North 11th Street, within sight of the Williamsburg waterfront. In the eight-week process, the ale comes out of fermentation tanks flat and is allowed to ferment again in the bottle.1

And what of the result? Read on, brothers-in-beer.

It comes out of the bottle golden, almost exactly apricot-colored, with terrific carbonation, and pours up a bodacious head.

The nose is very yeasty and hits all the right notes for a saison (even if I am drinking it in February and not at the late summer harvest, as is customary).

In the mouth, it's malty and dry, with citrus (orange) notes, honey, some spices. When cool, it has a nice long finish. Nothing surprising, if you know your Belgians, but a very solid composition within the style.

It is also 9% ABV and comes in a 750 mL bottle, so if you're not careful it will take you to school.