The brew of the earth 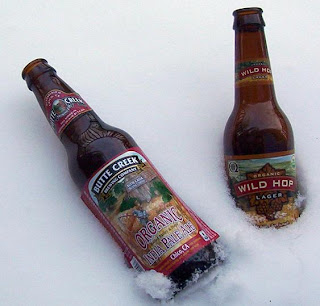 I like organic beers. They don't necessarily all taste good, but the spirit is well with them: the fruits of the earth, unadulterated (except by the mash tun), and transformed into delicious liquid bread. It's like having a farm in the glass.

For my birthday, a friend who knows me well, and properly, gave me a bottle of the Butte Creek IPA (the bottle above, on the left), wrapped appropriately in a brown paper bag. Very exciting!

It packs a hefty 7.1% ABV, and so tastes good and will, on an empty stomach, leave one feeling pretty well too.

This beer pours a head of epic scale, stability, and stubbornness. Even observing proper decanting techniques, two fingers of beer yielded a head that filled the rest of the glass and could not be reduced by gentle blowing, nor indeed even by waiting. In the end, I lacked sufficient patience to observe the head's full life cycle, and so the only remaining course of action was to love the whole beer, head first.

I recommend this to everyone, especially lovers of IPA. The first sip made me roll my eyes and think, "This tastes like the earth! Where does "dirt" usually figure into brewing, once the hops have been harvested?" However, more sustained drinking revealed a snappy, honey-colored IPA of full body. This is not your grandfather's English IPA, and like you, it is American, bold, and modern, but is also somewhat unsurprisingly (given the back-to-basics character of today's craft brewing culture) a truer IPA than what many modern British factories pour. I give it high marks for hoppiness, refreshingness (my term), and all-around tastiness.

Butte Creek Brewing is in Chico, California, and not – as I first thought – in Chino, where, seriously, he did six months for exposing himself to an eight-year-old.
Posted by AAK

That creep can roll.

NB. The photo associated with this posting includes a bottle of "Wild Hop" Organic lager, brewed by "Green Valley Brewing Company," which also brews "Stone Mill Organic Pale Ale." Don't be fooled! These are all brewed by Annheuser-Busch, behind the smoke-screen name of "Green Valley."
The Big Three (Anheuser, Miller, and Budweiser) are watching the craft beer phenomenon as it skyrockets and are doing what they can to elbow into that market -- so don't be fooled by these "phantom" breweries! Real reactionaries.

Butte Creek, of course, has nothing to do with that foolishness. You said it, man.