A Good Time for Beer 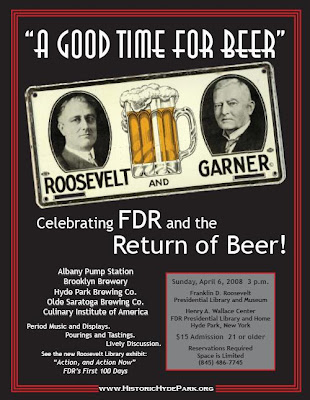 The Hudson Valley, where I live, is something of a hidden gem, especially considering its location. A land of great natural beauty (think of the Hudson River School), and diverse landscape, it lacks a great unifying industry (such as the winemaking in Napa and Sonoma) and so is not seasonally overrun with tourists. Rather, we have rolling hills, historic towns, horse, dairy, cattle, and produce farms, the River itself, and the oldest mountains on earth. It is a generalist's country, and definitively disproves the theory that the polymath is good at everything but excellent at nothing. Rather, it is the whole that is excellent.

The Hyde Park branch of the Roosevelt family gave us FDR, who loved his house on the river above all others (the White House included), and gave his home county (Dutchess) many fine civic buildings and miles of stone walls during the WPA.

But none of this matters here. What matters is that 75 years ago, fulfilling a campaign promise, FDR's administration saw the ratification of the 21st Amendment, and as a direct result, we all not only enjoy delicious beers daily, but also do we write and publish this blog without being imprisoned for sedition.

In celebration of this, Historic Hyde Park, in conjunction with the FDR National Historic Site (yes, the Department of the Interior), is sponsoring a Beer Festival and the produce of some local breweries. FDR would be pleased.

I intend for this posting to be the first part of two, the second to be written, of course, after sampling the brews and paying due homage at the gravesite.

"All that is within me cries out to go back to my home on the Hudson River." ~FDR

Big Easy Blonde- one of my favorites! What do you think of Skytop? I haven't been too impressed, (maybe I'm a snob) or spoiled by others.

Hmm. I will admit a bit of ignorance; I haven't tried everything. I liked their Amber Lager. A little unusual (obviously one more often finds amber ales), but easy-drinking and something that goes well with food. I wasn't too thrilled with the Diesel Scotch Ale, though. They tried to do a little too much with it and sacrificed cohesiveness, I thought...