Nice, if short, article on Indian Food and Beer 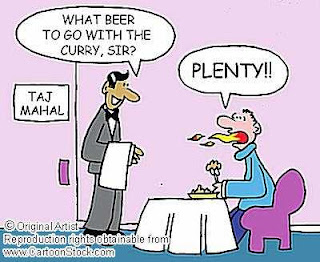 In his masterly tome, The Brewmaster's Table, devoted to the art of pairing beer with food, Garrett Oliver (of Brooklyn Brewery fame) writes about Indian cuisine and the pitfalls of drinking wine -- especially red wine -- with it:

"I can't tell you how many times I have seen nearly full bottles of wine, especially reds, abandoned on the tables in fine Indian restaurants. The food had ruined the wine, and the wine had ruined the food. The diner had somehow imagined that a Barolo could hold its own against a vindaloo or had sent a California Chardonnay to its death against a powerful chutney. What a shame!" (The Brewmaster's Table, p.86)

I tend to agree. It is at best an impaired, risky conjoining on the palate, and at worst a disastrous culinary nightmare.

So how about a beer? Here's a great little article from the Morning Advertiser (UK) -- if anyone knows their curry (And their beer), it's surely the British. In the aforementioned quote from Oliver, he goes on to say, "Weissbier would have saved those meals; in fact, it would have made them spectacular."

From personal experience, I have a handful of can't-go-wrong beer-and-Indian pairings:

For milder, creamy-sauce dishes (especially those with coconut), go for an Allagash White -- it works wonders with desserts, too. This pairing came to me at our favorite Asheville Indian destination, Mela, where they serve Allagash on tap.

If you've got a 5-alarm Vindaloo, why not break out the Avery Maharajah Imperial IPA? 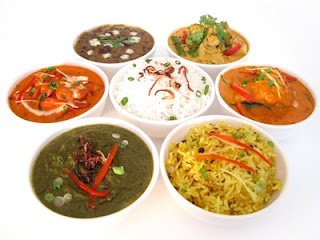 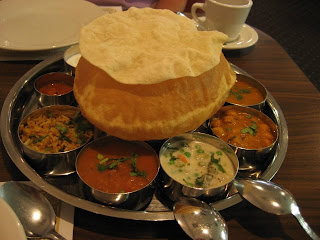 This is making me hungry just looking at it.

This is making me hungry just looking at it.