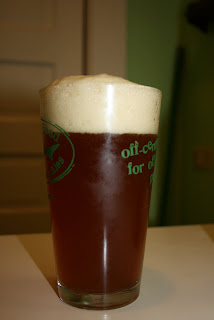 I. The Silvius Leopold (Hefe) Weiss was unveiled at the Dillwyn Beer Festivus last month, but I thought it needed an official review here, since Sara and I have been almost exclusively drinking it over the past month (we're also finishing off the cellared Niel Gow Scots Ale from October). One thing this particular batch has revealed to me is the importance of mixing the priming sugar thoroughly before bottling: this batch has fallen prey to a very uneven carbonation rate from one bottle to the next, a flaw I can attribute to my adding the priming syrup to the top of the bottling bucket, rather than the bottom. The above photograph shows the best of the batch, while you can get a good example of another bottle's pour in the photo at the bottom of this post. I must say, it is a testament to the overall flavor profile of this brew that even the flat ones have been drinkable.

Appearance: Almost orange. Nice and cloudy. When it's present, the head is billowy and foamy white, and thins out fairly fast. 3.5
Aroma: Not strong enough for me. Malt and sugar predominate, with a faint banana and even fainter allspice trailing behind. 3
Taste: This is where it comes alive! Bananas and cloves throughout, with a mild hop backbone. There is the slightest hint of a metallic/mineral presence, undoubtedly a result of our hard tap water. 3.5
Palate: (when properly carbonated) spritzy, refreshing, and quenching. 4
Overall: The main problem, as stated above, is the inconsistency of the carbonation from one bottle to the next. When it's on, it's quite good, very good, if not quite great. 3

It is a champion with late spring/summery foods: see the review that follows. It's also a winner with tuna/pasta salad, which brings a not-unpleasant sulfurish edge to the flavor.

Plugging these numbers into the BeerAdvocate rating formula yields an overall rating score of 3.4 (B-). Suffice to say, I'm most assuredly stricter on my own brews than, say, Sara would be, but as the craftsman in question, I think that's only natural. I'm on a constant quest to tweak and perfect my creations. So, this B- reflects my opinion that this brew is not my favorite that I've made, but still quite good.

II. One of the tangential benefits of having a lot of homebrew around the house is its availability for use in the kitchen (yes, I do enjoy cooking with beer....occasionally I even put it in the food....yuk yuk yuk...)

Beer is a great addition to any number of recipes, from breads to reductions to glazes to stews. (See my earlier post about beer in bread)

Last week, I decided to try my hand at some grilled chicken, and, inspired by Michael Pollan, decided to brine the chicken breasts prior to grilling. Brining, essentially, means soaking the meat in a salt-water solution, much like a marinade. So what did I do, of course, but add some of the Silvius Leopold Hefe-Weiss in with the brine solution. It was a wonderful thing to do -- one of the great benefits of brining is that it keeps the chicken quite moist throughout the grilling process, so you don't end up with a dry bird on your plate. It also (somehow...hooray for salt...) reduces the cooking time needed.
The real genius, though, lay in my also creating a beer-based barbecue sauce for the breast, again with the hefe-weiss. The combination was divine.
The side dish, a springtime potato salad taken from Barbara Kingsolver's Animal, Vegetable, Miracle. contained no beer. What better food-beverage combination, though, than potato salad and German beer? 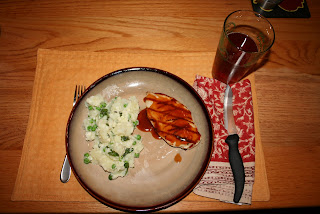 note the mostly flat beer in the glass.
I'm providing rough outlines of the recipes here, but do note that they are only approximations, not exacts. (The spring potato salad recipe can be found at the link above -- it is simple and delicious!)
BEER BARBECUE SAUCE
1 C prepared barbecue sauce (I favor the local-made stuff, sans the evil High-Fructose Corn Syrup)
1/2 - 1 C ketchup (again, preferably without HFCS)
2/3 C Beer (the sky's the limit -- I used homebrew hefe-weiss)
1/4 C honey, molasses, or malt syrup (I used organic barley malt syrup)
2 T lemon juice
2 T red wine vinegar
2 T dijon mustard -- dark pub (beer!) mustard might be fun to try as well
1 T worcestershire sauce -- I left this out and it was not missed
1 t tabasco or other hot pepper sauce
1/2 t black pepper
Optional:
2 garlic cloves, minced
1 onion, finely chopped
(I was lazy so left both of these out)

Combine all ingredients in a large bowl. Place in a saucepan and cook over medium-low heat for about 10 minutes, until thickened. Will also work well as a heavy marinade (before heating).

1) Pound the cuts of chicken to an even thickness (about 1/2 inch thick, depending on size). This will help in an even and quicker cooking. It also breaks up the meat a little, allowing the brine to permeate better.

2) Prepare the brine: dissolve 1 1/2 T of unionized table salt (or 1/4 C kosher salt) and 1/4 C coarse sugar (I like demerara or turbinado) in 6 C cold water + 1 C ligher-style beer (I used hefe-weiss; Wit, IPA or ESB would be fun to try, too) + 1 C boiling water. (The boiling water helps dissolve the salt & sugar faster.) Make sure the brine solution is cool (room temperature) before adding the chicken. You can brine in a large bowl, a shallow covered baking dish, or a large ziplock bag, so long as the pieces of chicken are completely immersed in the liquid. Brine for at least 30 minutes, but don't overdo it -- for 2 or 4 breasts, no more than an hour or an hour and a half.
The sugar is great because it helps caramelize the surface of the chicken as it grills.

3) Have your grill (either outdoor or stovetop -- I used our excellent Lodge cast-iron two-eye stovetop grill pan) completely heated when the brining is done. Take the chicken directly from the brine to the grill -- don't pat dry or anything. Place the chicken on the hottest part of the heating surface. Try to turn it only once (if grilling outdoors, leave the lid off), and cook over direct heat. Don't overcook -- depending on the heat of your grill or grill pan, it might take as little as 4 minutes (remember that brining speeds up the cooking time; you just want to make sure that it is cooked through and not pink anywhere).
Posted by Mark aka "Perm"