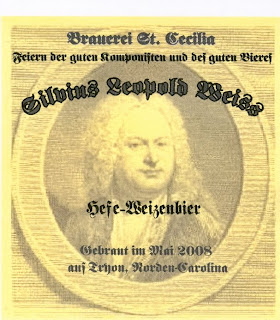 I. The hefeweizen has been, as of earlier today, moved into the secondary fermenter. All signs point to a winner: current gravity readings are spot-on, it's a lovely orange color, and it smells divinely weissenig: bananas and cloves out the wazoo. I can't wait.

II. The Sir Charles IPA is out and shining. It amazes me how the bottle-conditioning is like clockwork: sample a newbie even one day prior to go-time, and you'll be disappointed. A mere 24 hours later, and it's a different beverage entirely. I could set my calendars by the conditioning of homebrew.
I'm loving this IPA. Not as heady or hoppy as some, it nevertheless fits the bill and is quite tasty. Sara promises to write a review on the blog soon.

III. Slowly but steadily, I have entered into the next realm of the all-consuming beer hobby: the cellar. It may seem a bit counterintuitive to lay down (or, in the case of beer, "keep vertical") bottles of something that often include a "best by" date on the label, but rest assured there are any number of brews out there that not only stand up to cellar aging for months or even years, but also some that downright benefit from it. The most likely candidates are those with high alcohol content (7% ABV or higher), and those that are bottle-conditioned. However, certain stouts and porters, and even some fruit beers like lambics, also carry a penchant for the long haul. Much like wine, the keys are dark space, cool temperatures, and no movement. With our new living space's basement, I've alotted a corner across from our wine cellar (also nascent but hopeful) for some beer-cellaring experimentation. In the coming months, I'm hoping to be adding to it fairly regularly. And blogging about it as well.
A great inspiration: The Brew Basement.

IV. And speaking of (non-homebrew-ingredient) adjuncts, another fun aspect of the Beer Enthusia: glassware and stemware. Also, one thinks of wine and the myriad shapes and sizes and variations on "the bowl." Beer is coming into its own in this regard as well. Strike from your consciousness the frosted barrel-shaped mug. Think, instead, of something akin to this:

Of course, beer glasses come in many shapes and sizes: the familiar Guinness pint glass is the perfect receptacle for a good stout, or porter, or English-style ale. IPAs and English Ales also go great with those pint glasses that have the little bulge near the top. Those Oktoberfest tankard steins are perfect for a German lager. Hefeweizen goes best in a tall, elegant, curvy thing that looks a bit like something out of Star Wars. Stronger brews, abbey ales, and the like fare well in goblets and wine glasses. The Belgians go absolutely nuts, with individual breweries often having their own glassware -- some even that need separate stands just to hold them up. Why all the variation? Why all the fuss?
Well, much in the way with wine glassware, each beer style benefits best from having certain characteristics front and center (emphasize the nose, push the hoppy bitterness to the forefront, create more head, admire the sparkling clarity, allow it to breathe, etc.). The various shapes and sizes accommodate all these various traits differently for the different beers, maximizing the experience. Sure, you can drink a hefeweizen out of a Guinness glass. I do it all the time. But for serious tasting and appreciating, there's no beating the weiss glass. Plus, they look impressive. Plus, it's downright fun.
My current favorite beer glass style, if not quite my favorite beer, is the pilsner. Here it is, in action: 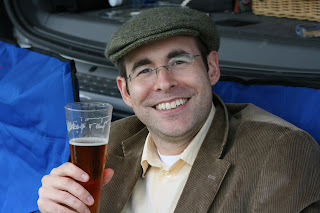 What about drinking right from the bottle? There's no better way to enjoy a Rolling Rock.


V. Experts and pros in the worlds of both cellar beers and stemware: the Belgians. Speaking of the Belgians, Sara and I finally scoped out Asheville's The Thirsty Monk on Friday night.

Stupendous! It's a bit on the pricey side of the equation, but they have the option of flight-size samples of their (14!) draughts, enabling a wider sampling at a reasonable bill. This is the closest I've seen anywhere in this country to the "half-pint" option commonplace in British and Irish pubs. And, I should add, TM's flight sizes are hefty enough to be worth your while: no festival tasting 2 ounces here! Most of the beers are also served in their own specialized glasses.
The Thirsty Monk has only been open since late December, and is still auspiciously new: the first smell one is greeted by upon entry is "clean." The whole place is spotless and immaculate, as if a Trappist with vows of silence had just been through with his mop and dustcloth. No smoking to be had, either. It looks as if they're still in the process of filling in the decor, but nothing says "good vibes" to me like a Delirium Tremens mirror and a big Chimay flag.

Points against them: I was a bit taken aback to hear the strains of "the Electric Slide" emanating from their speaker system when we walked in. The playlist did move on to something a bit more tolerable -- Gladys Knight, I think. But nothing says fine Belgian ales to me like...Motown and cheesy bad wedding reception line dances. I'm not sure what I would offer as a counter-suggestion: Gregorian chant would certainly add to the ethos of the space, but certainly not to the intent or the hopeful mood of the patrons. Acoustic folky instrumentals (roots, Americana, even some rollicking European folk tunes) might fit the bill. I mean, it is Asheville after all.
The bigger regret is the food situation: not having a kitchen of their own, they have risen to something of a creative occasion by providing not only Euro-inspired treats, but also ones that pair well with Belgian ale styles. Cheese platters, chocolate samplers, and cold baguette sandwiches and crepe sandwiches. That's the whole line, and once again price seems a little steep. Granted, one probably doesn't seek out a Belgian beer bar for the food, but for a place that opens at 4:00pm, it's a bit skimpy. If they ever get a kitchen situation worked out, I'd love to see some moules (steamed mussels...ahhh.) and frites (with or without the mayonnaise!).
Posted by Mark aka "Perm"

The new ale house sounds like a winner in a sea of winners around the Asheville metro area.

Lest you lose too much sleep over the lack of hot food...recall if you will the place we lived near in Mebane that served $1.50 Shiner Bock, $1 PBR and wait for it...

...microwave popcorn. At least the pool (and the women) were cheap.