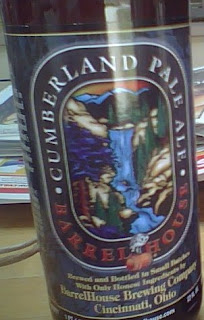 Another beer whose head got the best of me: it was huge, thick, and stubborn. My pouring, I will admit however, was perhaps overly casual. Fucking amateurs.

The BarrelHouse Brewing Company of Cincinnati, which started out in 1995 as a brewpub and has grown into a regional microbrewery of high repute with a cleverly-named line, has this to say about the beer:

Early Cincinnati brewers shipping their beers into Tennessee would generously hop their beer to prevent spoilage during the long arduous trip over the Cumberland Trail. This classic interpretation of the American Pale Ale features a solid foundation of pale malt loaded with fresh Cascade hops. Here's to getting where you're going!

I like any brewery that believes beer is necessary to getting where you're going. Where are my car keys? And hand me my beer! A very Dude attitude.

The Cumberland is pretty standard APA. Beneath all of that head is a clear copper and a promising nose more suggestive of good malt than powerful hops.

Indeed the suggestions of the nose are borne out, or rather further developed, by the mouth: the Cumberland is not as hop-dominated as the label suggests. It's not bad, just a smoother and less potent exposition of the form than many of its peers. Very clean in the mouth, with a very brief aftertaste of malty sweetness. Notes of orange and grain.

Overall, a very drinkable, if not overwhelmingly exciting beer. 4.6% ABV.
Posted by AAK